I Am Indignant! Prop. 8 Proves California To Be Even Crazier Than I Thought

I Am Indignant! Prop. 8 Proves California To Be Even Crazier Than I Thought

Something happened in the first week of November this year that surprised me immensely. As we all know, the people of this nation turned out in unheard-of numbers and voted, thereby making their opinions known and actively taking part in the working of our government. While this fact is an encouraging one in itself, what shocked me is the number of people who used this precious opportunity deliberately to take certain rights away from their fellow citizens. Is that really what the democratic system is for? 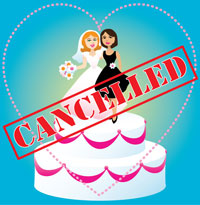 At the end of October, I went to San Francisco to attend a friend’s wedding. Despite some unwelcome rain, it was a lovely celebration and a fun weekend. But one thing stood out. All over the city, there were signs urging people to “Vote no on Prop 8.” Having no idea what “Prop 8” was at the time, I asked some local friends. They shook their heads and rolled their eyes and told me that it was a proposition to change the state constitution in order to make gay marriage illegal. My immediate response was to declare Californians as a whole insane. At the same time, I couldn’t believe that the measure would actually be passed. Not in California, where people are supposed to be so mellow and enlightened and, well, liberal. When, on November 4, California voters approved that proposition, even by a relatively narrow margin, they instead confirmed my initial reaction. They actually voted to strip equal rights from specific members of their own communities. I don’t understand how rational people in a country that is supposedly based on freedom would do such a thing.

Since this is a somewhat complex issue, I’ll break it down, as I understand it. Earlier this year, the California Supreme Court voted that to ban gay marriage would be unconstitutional because it would violate state constitutional provisions protecting equality and fundamental rights. The right to marry and form a family is generally considered a fundamental right. As a result of that decision, many thousands of same-sex couples in California went out and got married. Another result of that decision was that political action groups organized to create an amendment to the state constitution that would specifically define marriage as a union between a man and a woman. It went to ballot. Many millions of dollars were raised by organizations on both sides of the issue and ultimately, the proposition was approved. For a brief moment, full equality existed under the law, and then the people of California took it back.

Unfortunately, it’s not the first time an entire state has voted against equal rights for a group of its citizens. In 2004, several states did pretty much the same thing to greater and lesser extents. I’m not even going to get into the history of legislation in favor of racial and gender discrimination over the decades. The bigger question for me right now is why it happened. Why is it so important for people to interfere in the rights of others? Why are people so afraid to recognize the legitimacy of homosexual relationships? And why do they believe so strongly that it will have any sort of impact on their own lives?

The answer, usually, has something to do with marriage being a sacred institution, sanctioned by God and Church, an institution whose very definition is “a union between a man and a woman.” People talk about how same-sex marriage would undermine the sanctity of heterosexual marriage. Considering the divorce rate has been hovering between 40 and 50% for the past few decades, I would say heterosexuals are undermining it all on their own. And how arrogant are these people to claim that marriage is one sacred, universal and inflexible tradition? Marriage has taken shape in so many ways over the course of human history that it can’t even be fully documented. The church has only been involved for the past two or three hundred years. In some parts of the world, the couple doesn’t even meet before their families decide to unite them. Some cultures still sanction polygamy. In Las Vegas, a couple can be legally united by someone pretending to be a long dead pop icon, provided said officiant has the appropriate license. Throughout history, marriage has been a contract between two people entered into for a variety of economic, social, or romantic reasons, whether or not both parties were willing. That’s all it is. It’s an agreement to be recognized as a couple and to form a family unit.

And yet, so many people are convinced that if the right to marry is extended to members of a group who are different from themselves, it will mean the end of family as we know it. It’s the same belief that kept interracial marriage illegal in many states until the 1960s. In fact, the United States Supreme Court didn’t rule on interracial marriage until 1967. As far as I know, that ruling has had no effect on the stability of the family unit. So, what makes people believe that same-sex marriage would have a negative effect? How does someone’s marriage have any impact on a family living in the next subdivision? Or the next block, or even next door? Outside of the couple and their immediate family and friends, how is any aspect of a marriage anyone else’s business? You can’t walk up to a traditional heterosexual family home, knock on the door and criticize their child-rearing methods–well, not unless you’re a Supernanny or reality show crew of some kind. So, why is it acceptable to tell two consenting adults that they cannot be married? As far as the law is concerned, same-sex marriage has no impact at all on anyone who is not gay and wishing to be married. There is no quota in the nation’s city halls that limits the number of weddings per year. There are plenty of limo services to go around, plenty of florists and tuxedo rental places. The only thing that legalizing same-sex marriage will do is provide full rights under the law to committed gay couples.

Another argument people bring up is how gay marriage will adversely affect education. At first, I wondered if this meant people didn’t want their children to be taught tolerance. After all, isn’t tolerance the ultimate corruption? It leads to all sorts of dangerous things like making friends with people from different backgrounds and being kind to the less fortunate and understanding that not everyone shares the same beliefs and traditions. Some people prefer to shelter their children from such radical ideas. But apparently, this argument actually has something to do with the separation of church and state. It comes from the segment of the population that believes separation of church and state means that if something goes against their religious doctrine, public school children should not be made aware that it exists. However, since homosexuality has not been proven to be contagious, my guess is that merely hearing about its existence will not have a strong impact on children in general. In fact, I remember hearing of homosexuality as a small child, not grasping the concept, dismissing it as a grown-up thing, and continuing to play with my Barbies.

So, the general arguments against same-sex marriage are that it’s a violation of tradition, it will lead to the dissolution of family, it will corrupt children, and it goes against Church Doctrine. Well, I can’t argue with Church Doctrine. I can only point out that it has also had a hand in things like the Spanish Inquisition, the burning of witches, and the subjugation of indigenous cultures. But the rest of it sounds to me like simple fear; fear of change, fear of difference, fear of loss. They are all irrational fears, of course, but we cling to them as tightly as anything. Yet we also praise people who have the courage to break free from oppressive laws and practices. We admire people who set new precedents. I understand that certain changes can’t happen overnight. People need time to adjust to new ideas. They need time to see that there is nothing to fear. They need someone to set the example. This year, California had the opportunity to be that example. A huge, diverse and (relatively) progressive state, it would have been an ideal setting in which people could learn not to be so afraid of change. Unfortunately, that also made it a battlefield for people so afraid of change that they were compelled to rally people in neighboring states to raise money and campaign against it. In an election year during which so much emphasis was placed on the need for change, California could have set a new precedent. Instead, the people of California gave in to fear.

Paloma Ramirez grumbles about rent and rides public transportation in New York City. "I am Indignant!" is a regular column in every issue of The Public Sphere.

Whether it's to share stories, or to communicate with like-minded people, you can find us on the following social networks.